From Australian Life April 6, 2021
Penny Williams had never been to Bali. That was 2007 and, in the process of rebooting her life, the Sydney chef took a resort job in Candidasa, the tourism centre on Bali’s east coast; it made for a radical change after working in high-pressure restaurants at home and in big London hotels.

“And as I learnt more about the Balinese people and their way of life it seemed to make so much sense; that Westerners have to get off our high horse and start reconnecting to mother nature like they still do in Bali.”

Fourteen years later, Williams is still there. Kind of.

Her heart is in Bali; her husband too. And her business, a charming village restaurant and cooking school — Bali Asli — that has played host to thousands of Australian and international tourists since 2010. It’s her home.

But for now, Penny Williams is working and living in an environment very different to the lush, tropical highlands of a village in the Regency of Karangasem at the foothills of the occasionally active volcano, Mount Agung.

For at least a year, she’s in Katanning, a small inland town in the southwest of WA’s wheat belt, home to — among other things — the biggest sheep yards in the southern hemisphere. It’s flat, vast, isolated and quintessentially rural Australia. It’s also where the talented chef has hunkered down.

Williams’ story reflects a seldom-considered aspect of the COVID-led disaster that hit international tourism in early 2020.

In an effort to keep her business afloat — and a Balinese staff of 13 working — she took an “off-farm” job in November as her restaurant slumped under the weight of a tourism-led economy with no tourists. “So many different things went through my mind,” says Williams down the line from the small country town where she’s working at the Premier Mill Hotel and its associated Dome Cafe.

“We’d just pulled out of something similar with the eruption of Mt Agung and then the earthquake in Lombok. We’d had that experience behind us and we said ‘OK, guys, we know what to do here’. Well, we thought we did.

“We thought we knew how to weather this storm because we’d done it before but then as time went on we discovered it was going to be much more than what we’d expected.”

Everything closed, including Bali Asli, and when it was able to reopen, all staff were on reduced hours; there wasn’t much revenue to spread around.

Williams eventually realised her best long-term bet, for the business and her staff, was to find a job in Australia, minimise her expenses, and send as much money as possible back to Bali.

“I did a lot of self-analysing when I had all this time on my hands. A lot,” she says.
“I looked at what I was doing in the business and I realised I was picking up behind my staff so I thought, it’s time for them to step up to the mark, to develop. My two senior staff became managers, everyone stepped up a line.”

There were some cultural hurdles, too. Her husband is from northern Sumatra.
“(It’s) a culture where women look after the home and family and the husband goes out to earn a living. I said ‘I don’t know if I can find work in Indonesia but I think I can get work in WA’. That really got to his ego and cultural mind. He felt he’d let his wife down and it all got a bit awkward. I had to just leave him be. He was so upset. I confided in his sisters and asked if I could do it. I had their blessing, so I did.”

The chef was clear in her intentions.

“The idea is to earn as much money as possible to send back to Bali. I told Nigel I’m happy to come and commit, create some interesting things, but in turn I need your help to keep my expenses to a minimum so I, in turn, can support my business in Bali.”

That was November and after the mandatory quarantine in Perth, it was four hours down the highway to a provincial town on the way to Albany.

She’d never been to WA before, either.
“I love the Australian outback,” she says.
“I can smell the eucalypts and the lemon-scented gums. I’ve never lived in an Australian rural area before. (But) I very suddenly and abruptly realised the people here are very different to the people in Bali.

“Everything in Australia is very harsh and hard and defensive compared to the Balinese respect for everyone and everything. I was used to that, and here there isn’t that respect, very often, with these country folk I’m working with. It was a cultural shock. I’ve had to relearn all my management skills that I’d had to unlearn in Bali.”
Williams’ remit is to develop events at the architecture award-winning drawcard hotel.

“We’ve got so many people wanting to do great things here but unfortunately, when I arrived, we were so short-staffed that I’ve been doing the lion’s share (of my time) in Dome Cafe ever since.”
But it’s worth it.
“Through the technology we have now we’re in touch every day. Every week we have a management meeting. They’re doing a fantastic job. I’m so proud of them.”
And until November at least, but possibly March 2022, says Williams, far-flung Katanning is home. She hopes it’s the start of a possible new future consulting in WA, but living back home in Gelumpang village. Time will tell.

Nobody, however, could say she’s not committed. 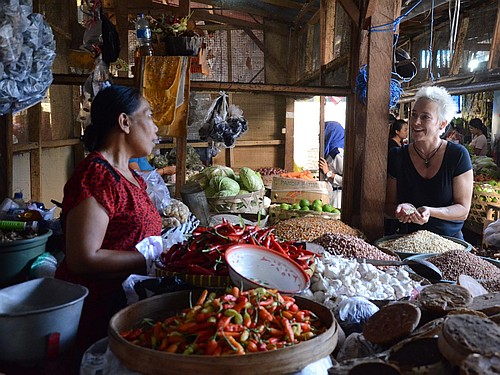 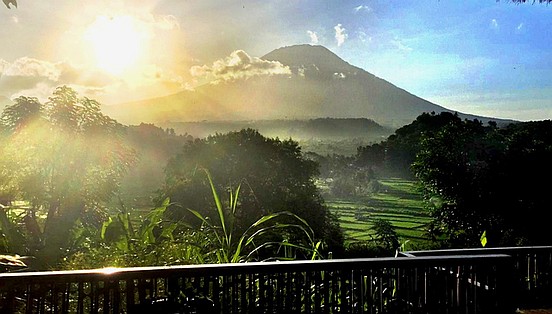 Bali Asli is open for lunch reservations Friday to Tuesday. We are closed on Wednesday and Thursday.
We are serving our famous Megibung menu, which changes every day depending on what we find in the garden.
You are welcome to visit us from 11.30am and last lunch orders are at 3.00pm
Our Culinary adventures and cultural encounters are still available too. Join our Chefs when they go to the Amlapura market or adventure with the team through the country side and visit a Lontar museum and learn the art of writing the ancient Balinese Sanskrit.
Please call or text us to make your reservation +6282236909215

Have a read of this great review 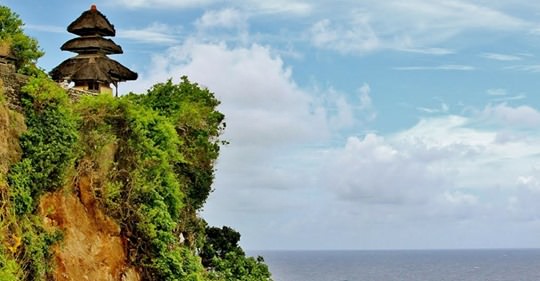 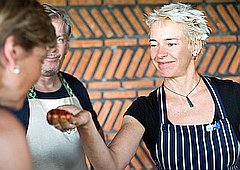 25 Best Things to do in Bali Indonesia

As the most popular island in the entire Indonesian archipelago, Bali is full of surprises and besides the promise of sunshine and tropical waters a visit to Bali Asli in East Bali is a must.

Vacationidea has the full story.


The Ultimate Guide to All Things Bali 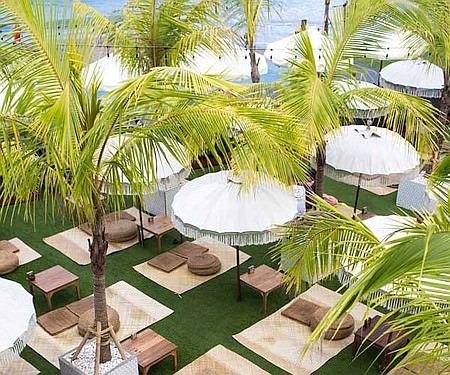 Looking out from the deck at Bali Asli, it’s easy to see why
Australian chef Penny Williams fell hard for East Bali. 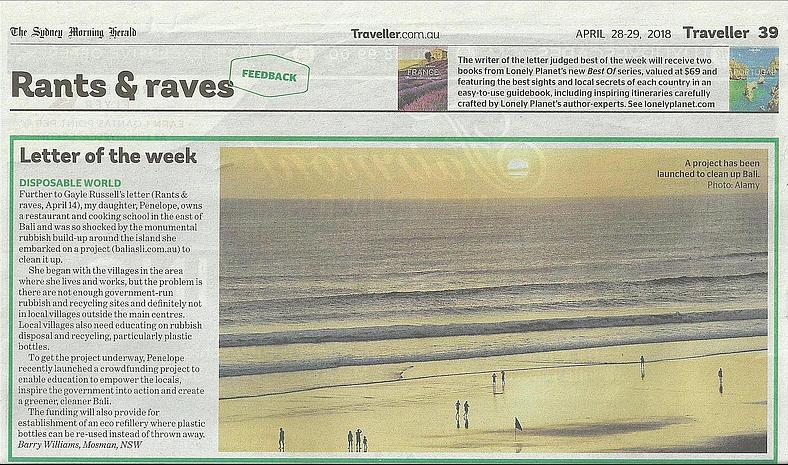 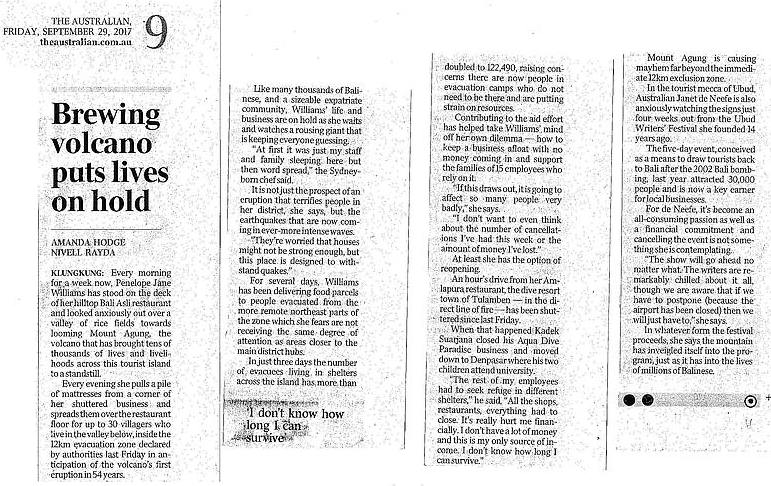 Travelwire Asia
These days, there seems a growing awareness about local produce and a general curiosity among tourists about the regional foods of Indonesia.
There’s also hope in some of greater Bali’s operations and restaurants that plug local produce, promote sustainability and empower local communities along the way.
Bali Asli is one of those restaurants that serves only traditional East Balinese cuisine.
Read more at Travelwire Asia

Singapore Airline magazine says for a perfect photo opportunity visit Bali Asli
Read the story here
“Bali: Food for the GODS”
There is more to Bali than sun, surf and shopping.
This article takes you on a culinary journey into the islands heartland to discover the real flavour of Bali.
Open PDF here to read the article

The first episode of the new Luxury Escapes TV show featured Penelope and Bali Asli.
There are 3 clips you may like to view just click on the links:
At Bali Asli

The Trip to the Temple and picnic lunch